Back in November last year, I made a small quilt based on Kitchen Table Quilting's Giant Blocks series. I loved making that quilt so much, when I was planning my to make list for this Summer, I added another Giant Blocks quilt to it. 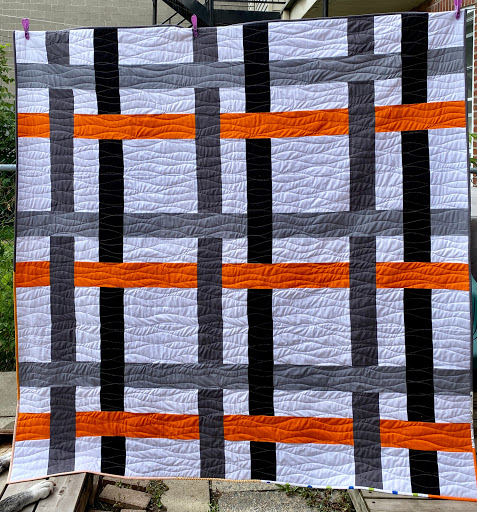 This is the August block which is crazy simple to sew, but when you put a few of them together in a quilt (in this case 9), they create a really striking design.

When I was planning which fabrics I would use to make this, I misread the tutorial and thought I needed four different fabrics. I chose Kona solids in White, Ash, Charcoal and Black. And when I started cutting, I realized I needed a fifth fabric. I frantically started searching for something I had in my stash that would be a large enough cut and landed on Kona Torch (can't remember why I bought this colour) and I think the fun pop of orange kind of works. 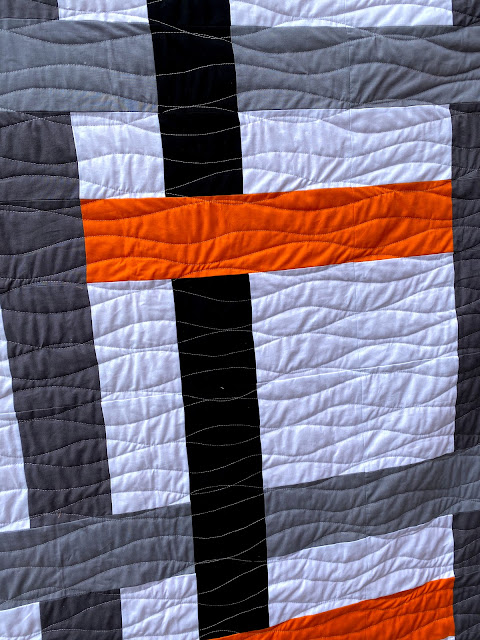 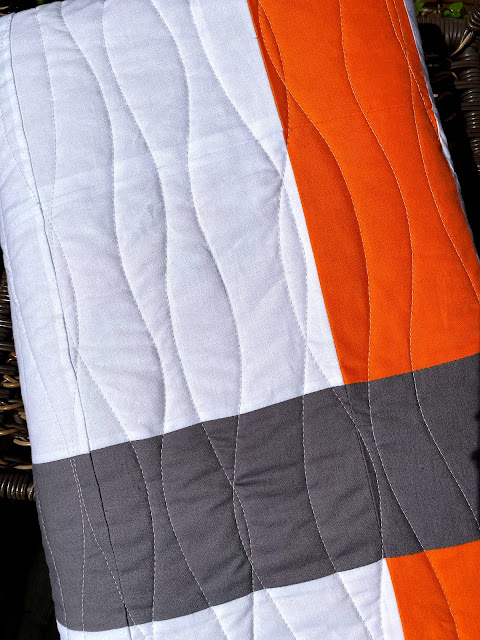 The binding was a really nice surprise. I was ready to cut 7 strips from one of the solids I used but decided to check my binding leftover strips to see if I had anything that would work. And I did! I was able to piece together 290" of binding, including some orange bits. 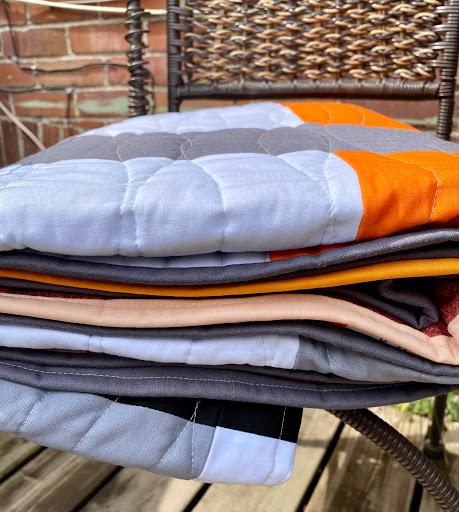 So I'm really pleased with my new quilt! It was entirely done from stash and I didn't have to prepare binding for it! 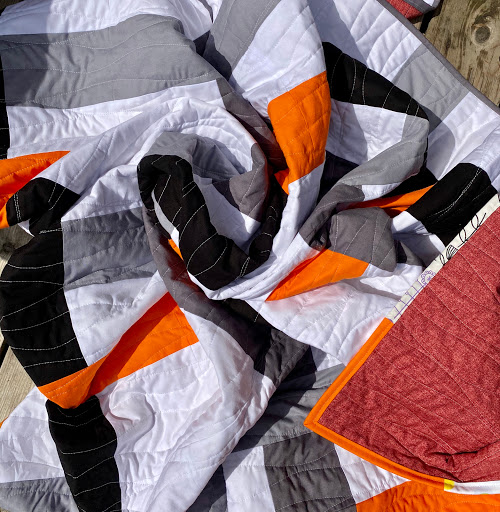 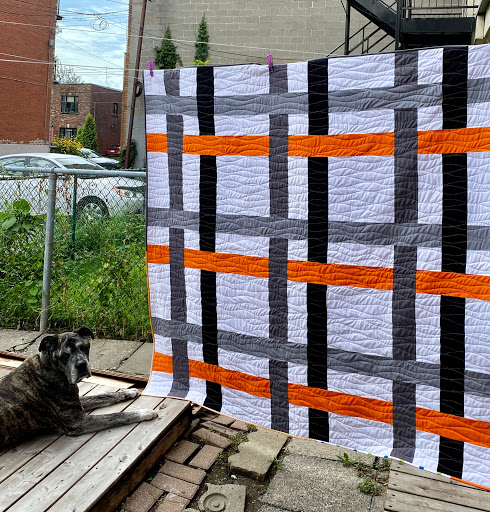 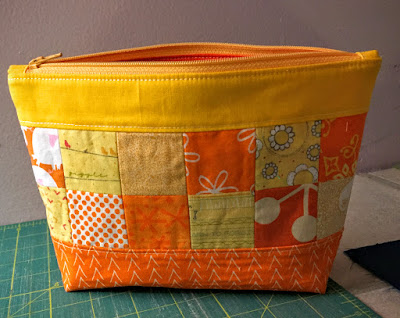 After I finished my Midnight Mystery quilt , I didn't quite feel like starting a big project.  I have many patterns for smaller makes, but I went back and forth trying to decide what to make next and just couldn't make up my mind. And then I thought - when I traveled to Denver last month, I had to put my make-up in a Ziploc bag because I gave all my zipper pouches away!!  So off to Pinterest I went to scroll through my Pins and found this tutorial . It's finally starting to look like summer over here, so I went with yellow and orange scraps to put this little pouch together.  Even the lining is a scrap! Now I can't wait to travel again so I can bring this cutie with me! I also cut all of my pieces to make a 241 Tote Bag next - a special request from my step-daughter's roommate.  I have a day off work tomorrow so hope to be able to finish the bag over the weekend. Linking up at Crazy Mom Quilts for Finish It Up Friday and at Sarah Goer Quilts fo 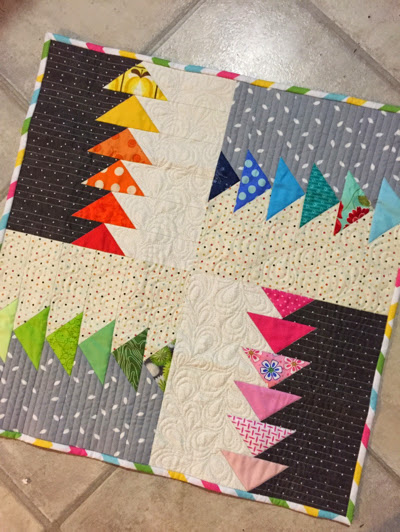 Welcome to TGIFF!  I'm so happy to be hosting this week - the added motivation to get this mini finished was awesome. A couple of months ago, on a complete whim, I signed up for the #igminiswap over on Instagram.  A mini was perfect because it's a relatively small commitment, I knew I could complete it in time and I really love mini quilts. On the down side is the added pressure of making something for a stranger.  I struggled with finding the right pattern, choosing the right fabric and then deciding how to quilt it.  After weeks of indecision, I was browsing through Pinterest pins when I see this one .  My partner loves low volume fabric and pops of colours... Perfect match! I used scraps from some of my favourite fabrics for the geese and added more colours in the binding with this fun chevron print.  For the quilting, I went with paisleys in the cream background, some straight lines in the darker areas and some simple stitch in the ditch around the geese. I really hope my p 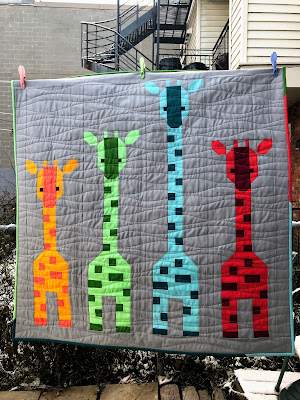 A colleague is having her second baby soon. I made a quilt for her first baby so of course I had to make one for her little baby girl. I purchased the Giraffes in a Row pattern from Sew Fresh Quilts because, let's face it, it was perfect for this little baby. My colleague already decided this baby girl will be her last - her little family of four is done. I chose Kona solids in eight different shades for the giraffes, Kona silver for the background and Kona black for the eyes.  The binding is scrappy, made with leftovers from the giraffes. For the quilting, I used my walking foot and quilted wavy horizontal lines with the very versatile Aurifil #2600 (Dove) in 50 wt. The backing is a really cute Riley Blake print. I don't always label my quilts but this one needed one! To make the label, I simply folder a square in half and stitched the label onto the back when I sewed the binding on. I then hand stitched the rest of the label to the quilt. My collea